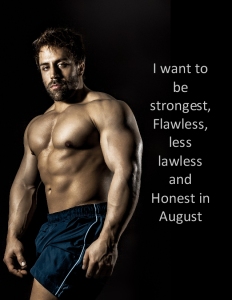 White Rabbit! White Rabbit! White Rabbit! Welcome to the month of August 2014. Our Mission this month is to become the Strongest, Flawless, lawful and Honest person in August. I stayed up late last night seated perched in my study finding the right solitude to offer gratitude to Almighty GOD for July 2014. I wanted to say farewell to July in a very special way. I wanted to see it pass awake rather than asleep. I wanted to reflect on my performances in July by looking into my diary which accounts for my time, my workload and my performance. I wanted to establish whether I was unselfish, whether I tried hard enough, whether I was charitable enough or pleasant enough. I needed to judge myself by reflection rather than judge others by rejection. Judging myself can only mean one thing – to become a better person. I needed to inspect every task written in my memorandum by scrutinising my performances rather than ignoring it. Judging others is the converse of inspecting my own true character. Finding my true character comes from Correction. Before July ended, around 11:30pm I was already ready to make a corrected start in August. On reflection, inspection and correction four potent words appeared in the vision of my mind-set. These words were Strongest, Flawless, not Lawless and Honest in August. If I wanted to make August a better month for me I need to become resilient by slacking in my emotional content and tracking my promotional content. Let me exemplify, wasted time is non retrievable time and therefore becoming too emotional pulls you back in your day. You need to be promotional about yourself by exercising positivity and marketing your abilities to the outside world. Getting into an in-depth emotional state makes you too sensitive over issues that are pertinent to your success. What comes of tomorrow is what was etched in your day yesterday. Emotional content mars the passages of your time elusively. A golden opportunity that cometh your way has passed you because you were too emotional to take the right action. To make August a better month for me I needed to become immaculate in all that I do. I need to stride for perfection in a pure and pristine way. I needed to become law-abiding rather than lawless. Every movement of my action needed be scrutinised to ensure respectability and decency. Travelling at 31mph in a 30mph zone means I was lawless. Throwing my stub onto the pavement means I was lawless. Spitting, arguing, molesting, stalking, lusting, fighting, abusing, raging, tempting, tailgating, murdering, injuring and deceiving are examples of lawlessness. Quote of the day: ‘Many of us get away with it when we are lawless because no one notices but when you judge yourself you will notice. You will notice that you are lacking in the qualities of being Strong, Flawless, Law Abiding and Honest.’ It is hard to maintain honesty. Sometimes we speak white lies to avoid unpleasant situations. To become a worthy citizen on Earth I need to exercise my sincerity to others. I need to establish a character that is trustworthy. I need to be good, gentle, humble and kind. I need to maintain this personage in order to be worthy to the world. I cannot be dishonest if I have a job to do. My job is enormous and therefore to be accomplished and fulfilled I need to be honest. I have judged myself over a lengthy evening in the hope to make August a better month for me, are you willing to judge yourself too. I wish you a pleasant month in August and I want to encourage you to carry a symbol of Strength, perfection, lawfulness and honesty. With love, fondness, honesty, pureness, dignity, worthiness and sincerity from your friend for life, I wish you well – Anthony